Creating livable neighborhoods in Middleborough's Downtown, 40R is a community and economic development tool that will enable the town to shape growth near its new MBTA Commuter Rail stations.

Welcome to the Middleborough 40R Page

The Town of Middleborough recently adopted Chapter 40R zoning in two locations (one adjacent to the new MBTA Commuter Rail station and one at John Glass Square). These new zoning overlay districts will allow more compact, mixed-use, walkable developments that are close to the downtown, public transportation, and with access to Interstate 495.

Please browse the information below page to learn more about 40R in Middleborough.

You may also view the project video to learn more about 40R and how it advances Middleborough's community and economic development efforts. 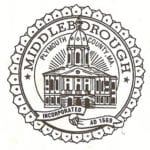 Please also check out the project video for more information about how the bylaw and design standards were created. 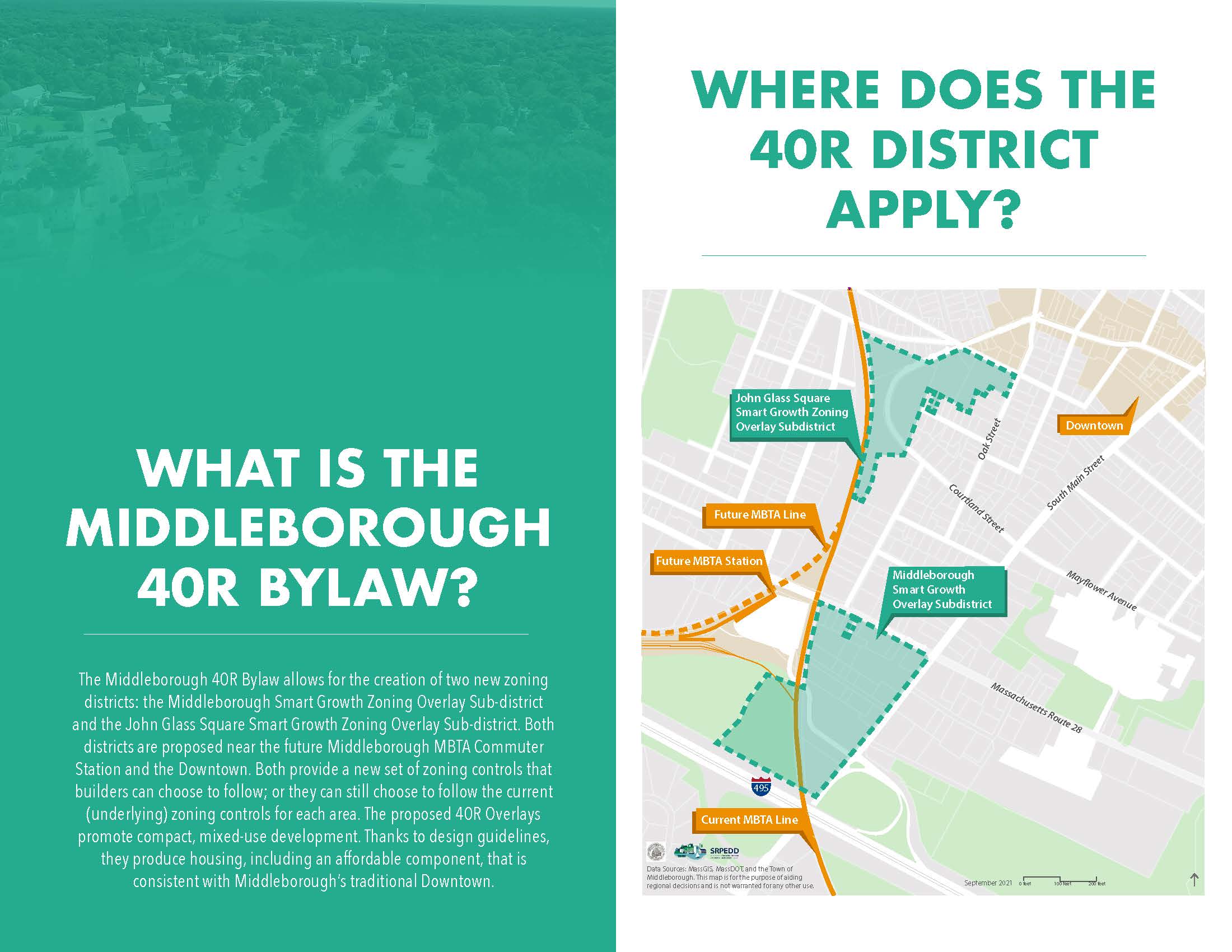 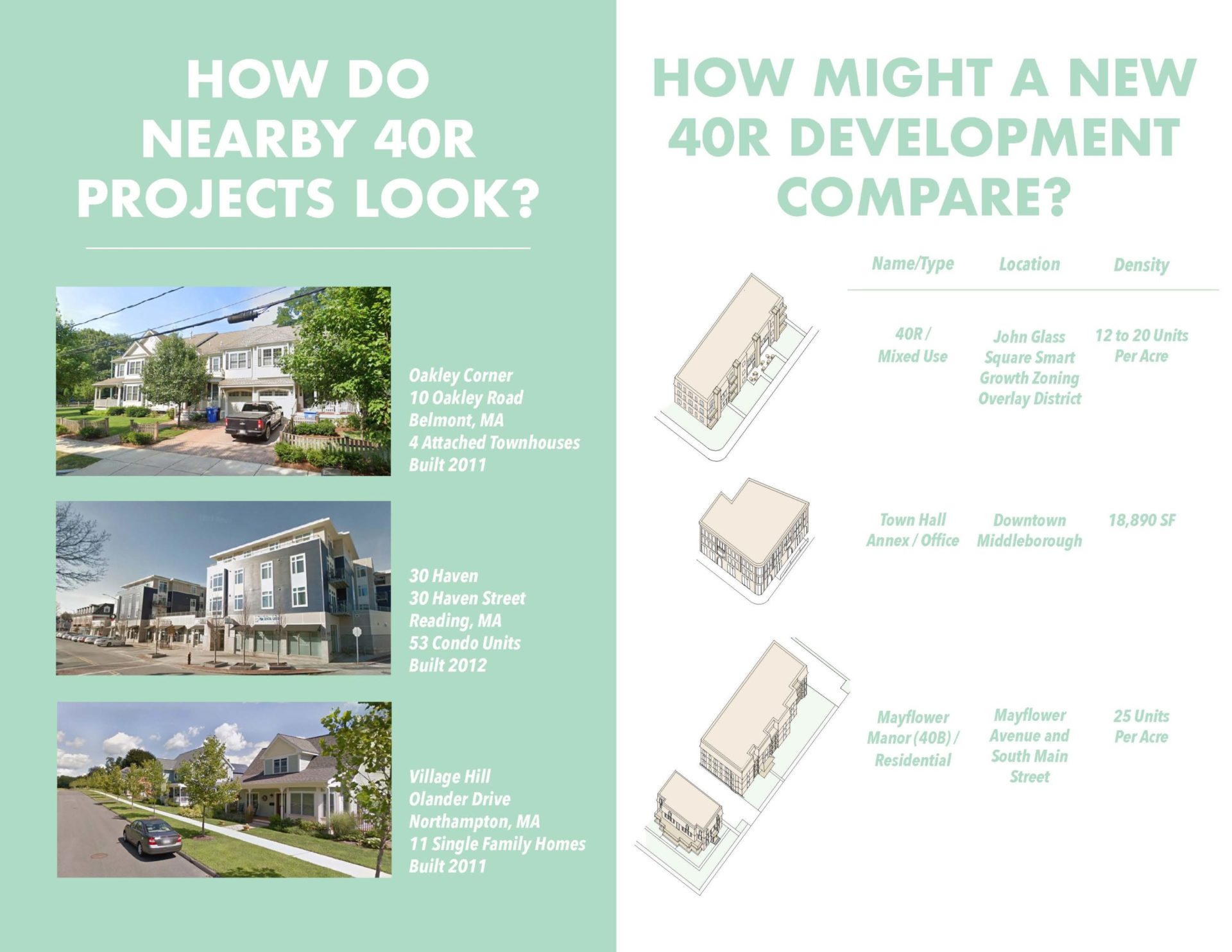 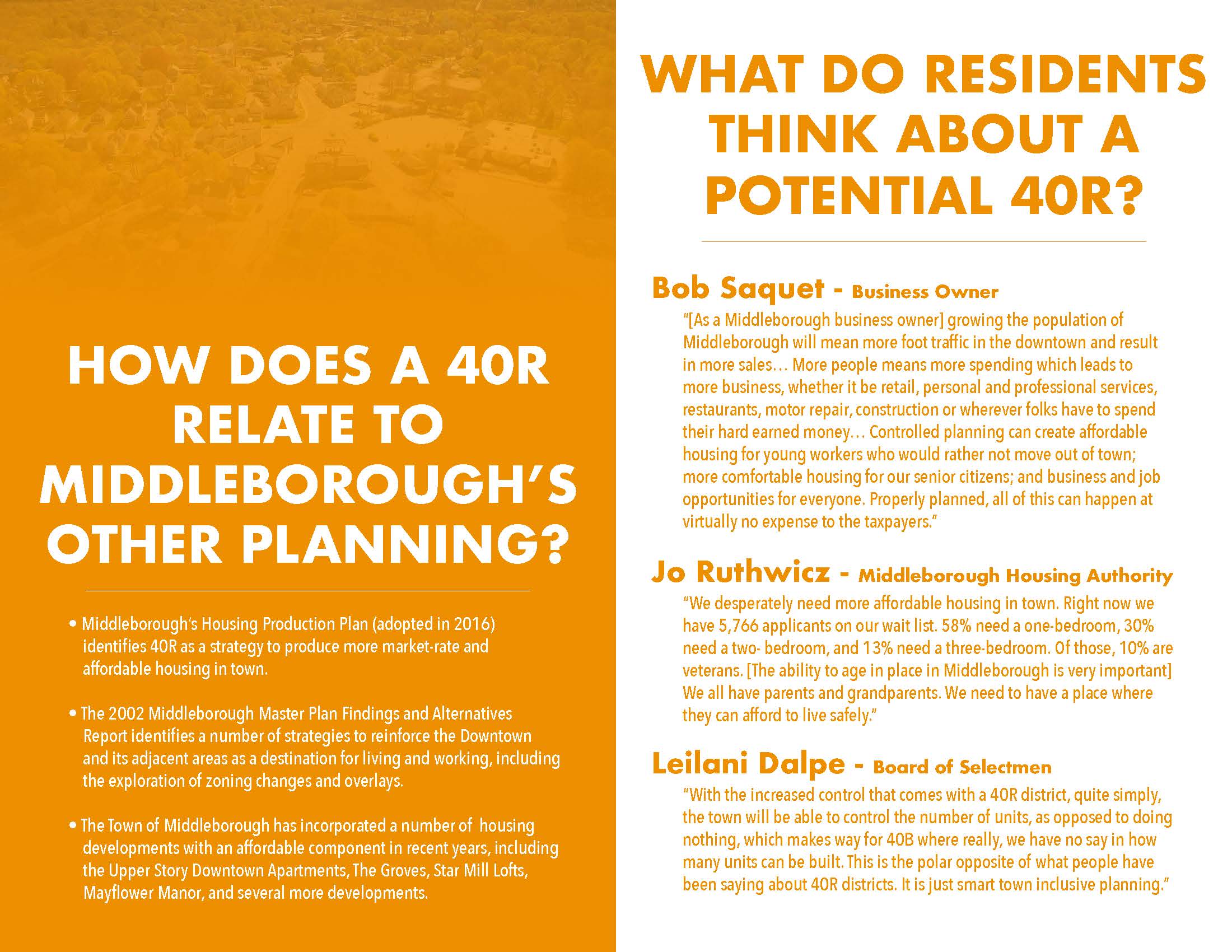 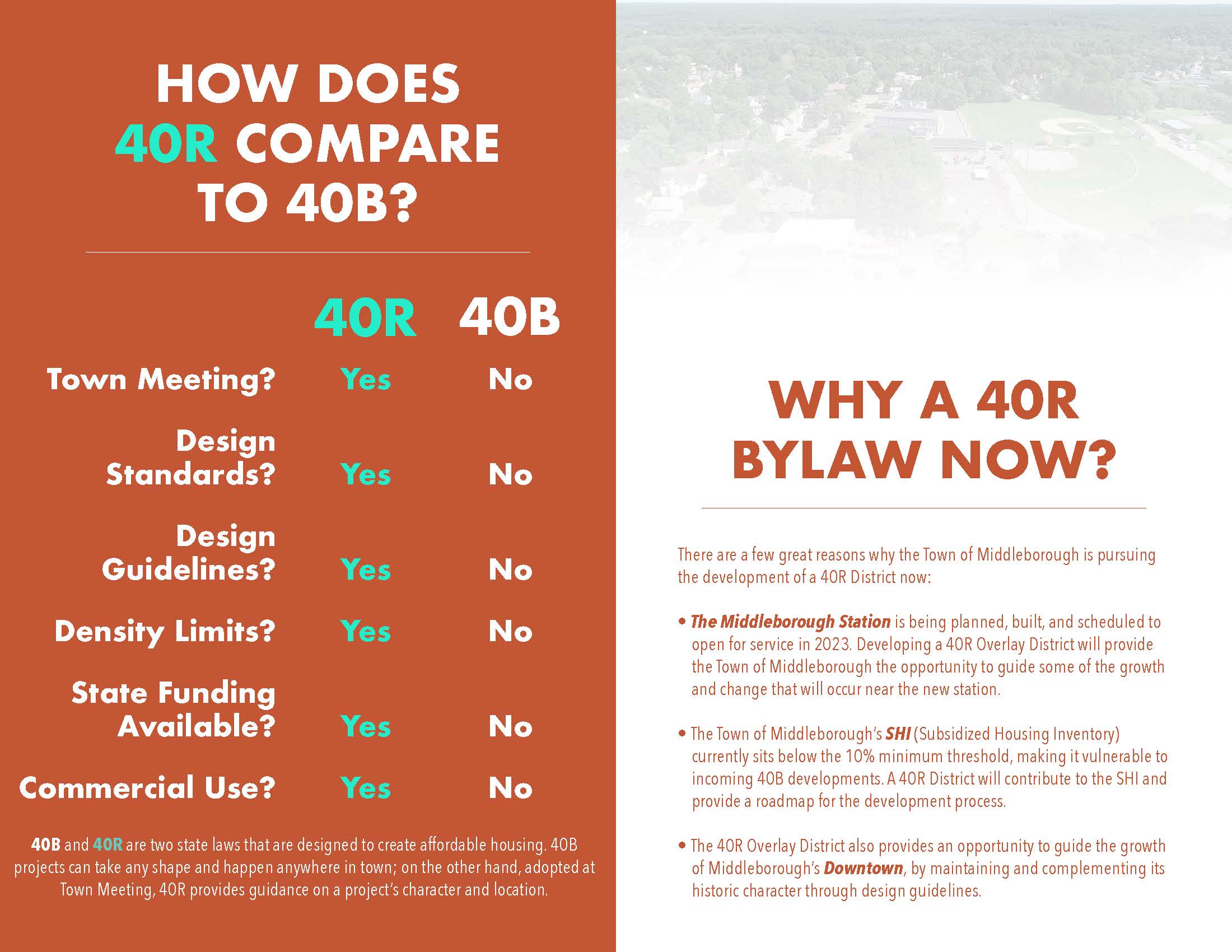 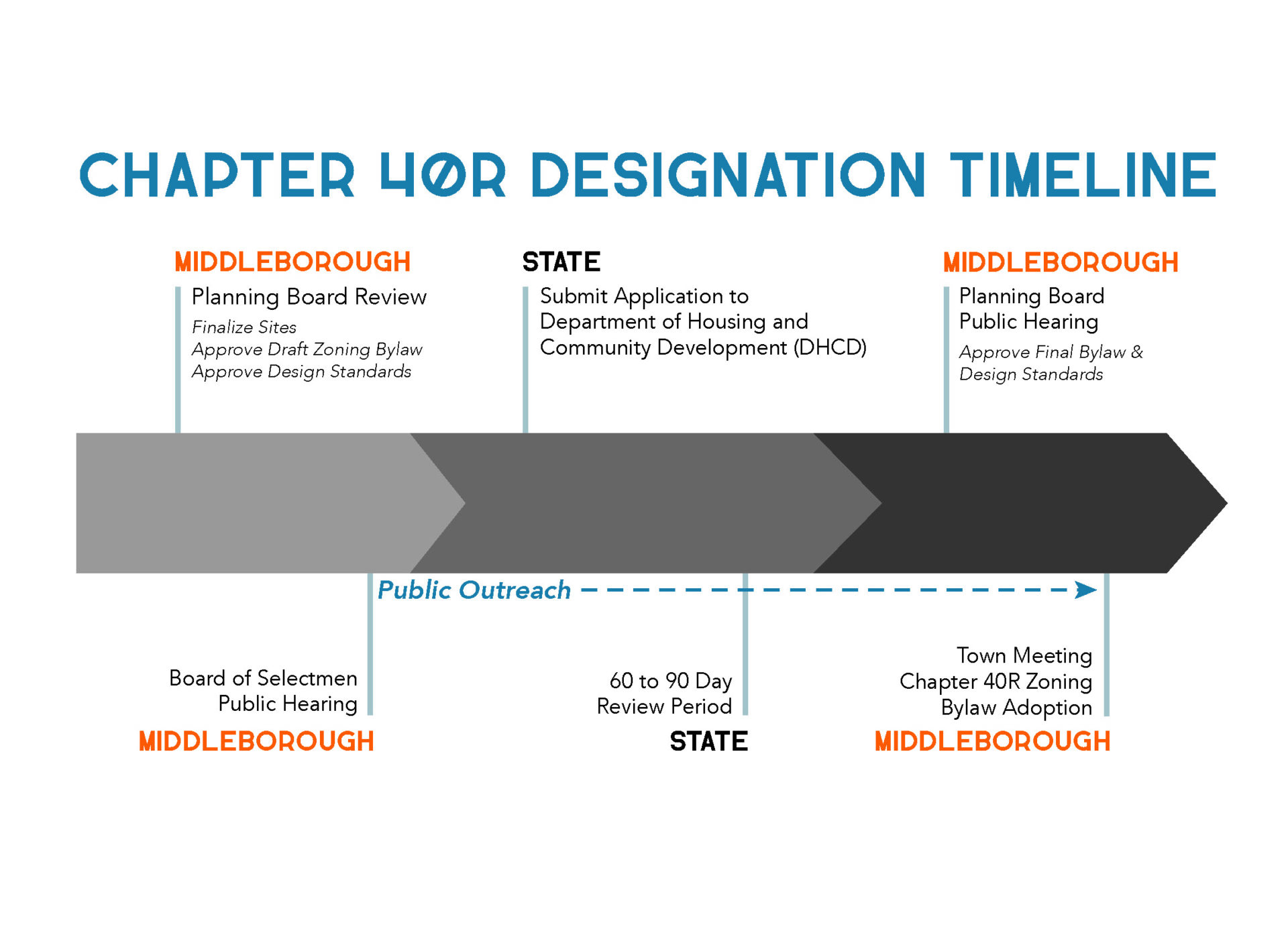 What is Chapter 40R and why is Middleborough looking to adopt it?

The “Smart Growth Zoning and Housing Production Act” of 2004, otherwise known as “Chapter 40R,” provides incentives to communities that create zoning districts that encourage compact, mixed-use development (including commercial uses and market-rate and affordable housing), typically located near public transportation or town centers. Chapter 40R provides for local input over the location of the development, allowed densities, and development design.

Middleborough is looking to adopt this zoning overlay bylaw to provide the market with the option of creating this type of development at two locations within walking distance of the town’s planned MBTA commuter rail station.

What is a Zoning Overlay bylaw?

Zoning is the way a community regulates how land can be used or developed (type of use, density, dimensional constraints, etc.). A zoning overlay bylaw provides a different, separate option for land development in a specific location; however, it does not mean that future development must adhere to both the underlying zoning and the overlay zoning. Future growth can take place under the rules of the overlay or the rules of the existing zoning – it’s the owner’s choice.

Where is this located?

What are some of the benefits?

There are many benefits associated with adopting Chapter 40R overlay zoning – the primary ones are highlighted below:

First, adopting the zoning provides for direct cash payments to cities and towns that create 40R districts that meet location and procedural standards set out in the statute. Localities become eligible for a zoning incentive payment when they adopt the overlay and a density bonus payment ($3,000 a unit) if and when units are built using it.

Second, the bylaw requires that developers set aside at least 20% of all new ownership residential units and at least 25% of all rental units as affordable for individuals and households making up to and less than 80% of the Area Median Income (AMI). Those units would then be included in the town’s Subsidized Housing Inventory (SHI) and will count towards achieving the requirements of Chapter 40B.

What is the process for approval?

The process involves many steps – all leading to final approval at Town Meeting. Middleborough’s process is outlined below:

Middleborough is currently on Step #4 – The Town of Middleborough has been gathering input from the community. On October 4th, 2021, the Town will host a Planning Board Public Hearing (Step #5), where residents will have the opportunity to vote on the Bylaw.

What is the estimated build-out for the 40R sub-districts?

The John Glass Square Sub-District allows for a density of 12 units per acre while the Middleborough Station Sub-District allows for a density of 20 units per acre. Using those densities, and the formulas provided by DHCD, Middleborough’s Planning Department and Office of Economic and Community Development in conjunction with SRPEDD, the town’s regional planning agency, have determined that the maximum build-out within the 40R district is 632 new units. Please note that this maximum build-out assumes that all parcels within both sub-districts would be developed to their maximum potential. This estimate was done to provide the town with an understanding of maximum incentive and density bonus payments as well as to ensure that needed town services could be provided. It’s important to note that, in reality, some parcels of land within the proposed District may not be developed, and that others may be developed or redeveloped in a manner that is less than the build-out calculations (due to factors such as the size of the particular parcel, issues related to access, or town infrastructure constraints).

How does “Chapter 40R” fit into the State’s ongoing housing production efforts?

Housing production, especially affordable housing, has long been a topic in the Commonwealth. Many laws and programs attempt to produce affordable housing. The first and best known, “Chapter 40B”, enacted in 1969, reduced local barriers and required communities to meet a 10% affordable housing unit threshold. Decades later (2004), “Chapter 40R” was enacted to encourage compact, mixed-use growth with an affordable housing component at or near public transportation or in town centers; 40R also offers incentives and allows for local control. Then in 2017, the Baker-Polito Administration announced the Commonwealth’s Housing Choice Initiative – a new state program committed to producing 135,000 new housing units by 2025. Focusing on incentives for housing production, this program provided grants and technical assistance from a variety of housing agencies to communities that achieved Housing Choice designation. Lastly, the recently signed House, No. 5250, An Act Enabling Partnerships for Growth, included zoning reforms to help address the ongoing housing need. Specifically, those reforms included reducing the required two-thirds vote to a simple majority vote for zoning changes and requiring that all MBTA communities have at least one zoning district of reasonable size in which multi-family housing is permitted as of right.

How can I provide input?

The town has developed this Chapter 40R zoning webpage for this project. There are a number of informational items on the webpage and a digital comment card for town residents, business owners, and key stakeholders to provide comments. Additionally, the town will be hosting a public input session in the early summer to provide information, answer questions, and record comments. Details will be released very soon.

Questions can be directed to the town’s Economic and Community Development Department and/or the Planning Department.

Send an email to the project team. 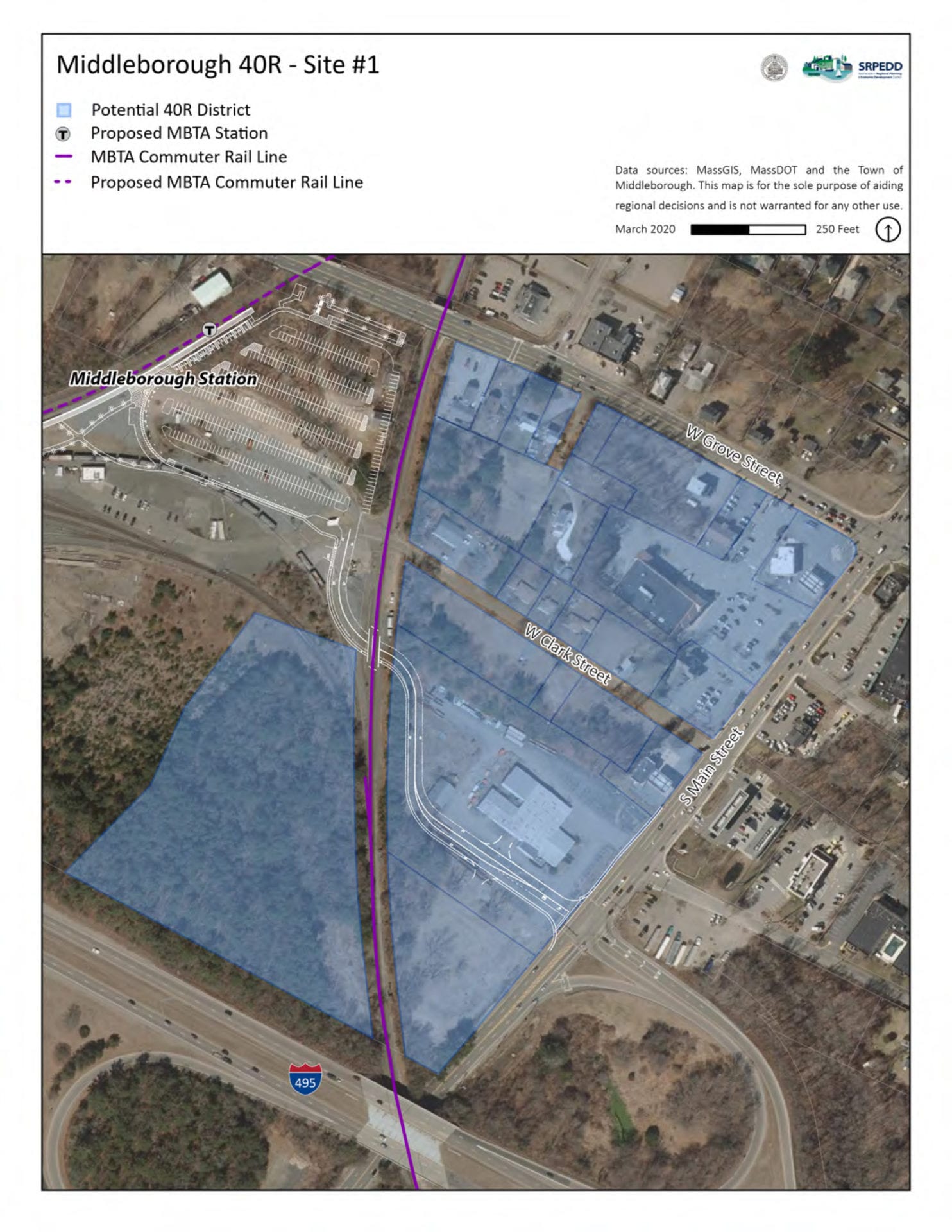 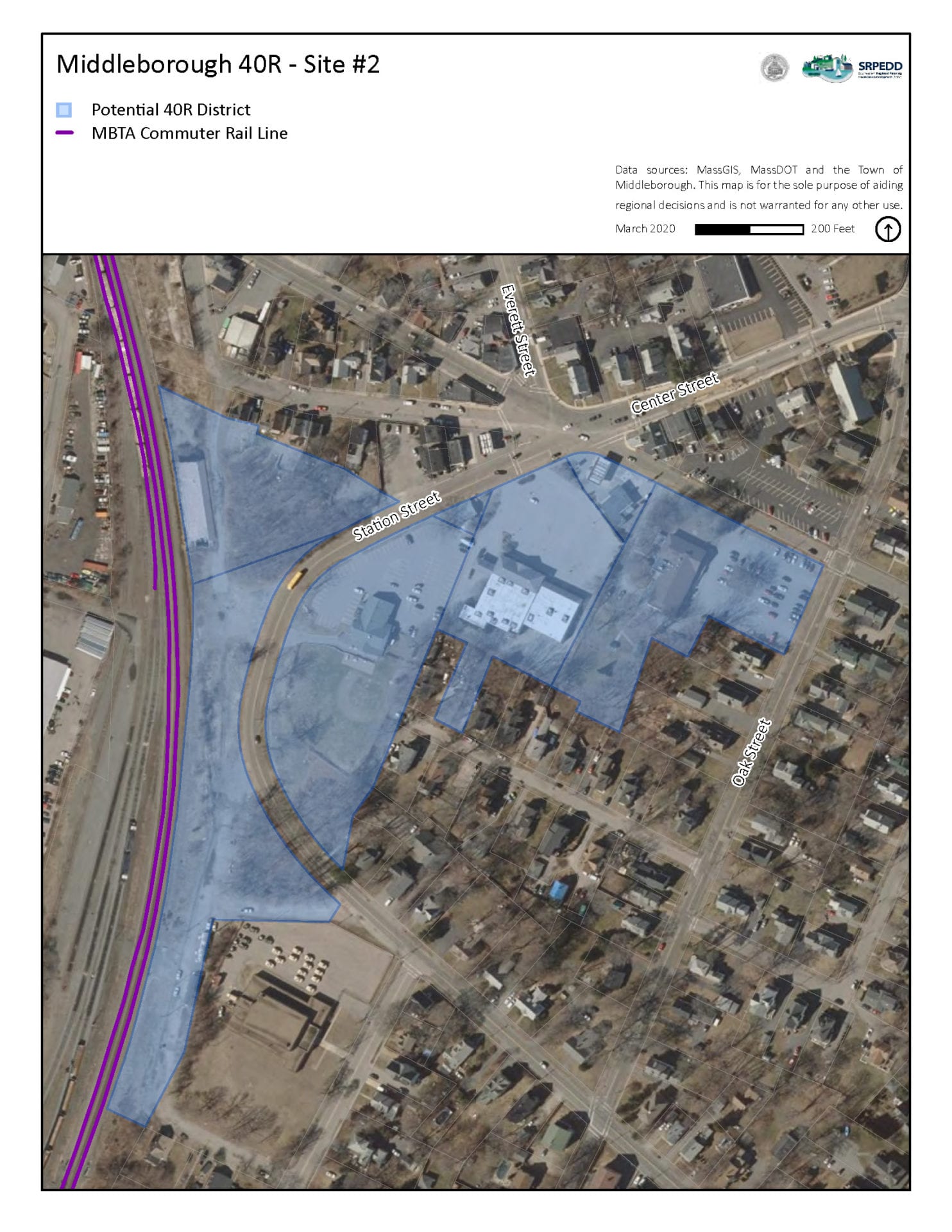 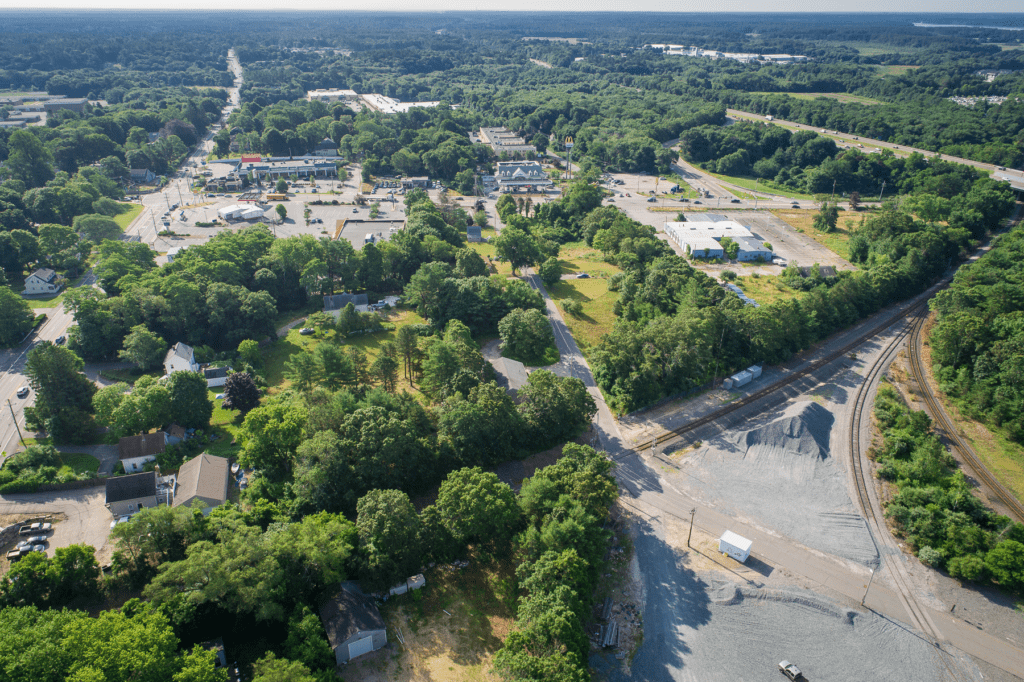 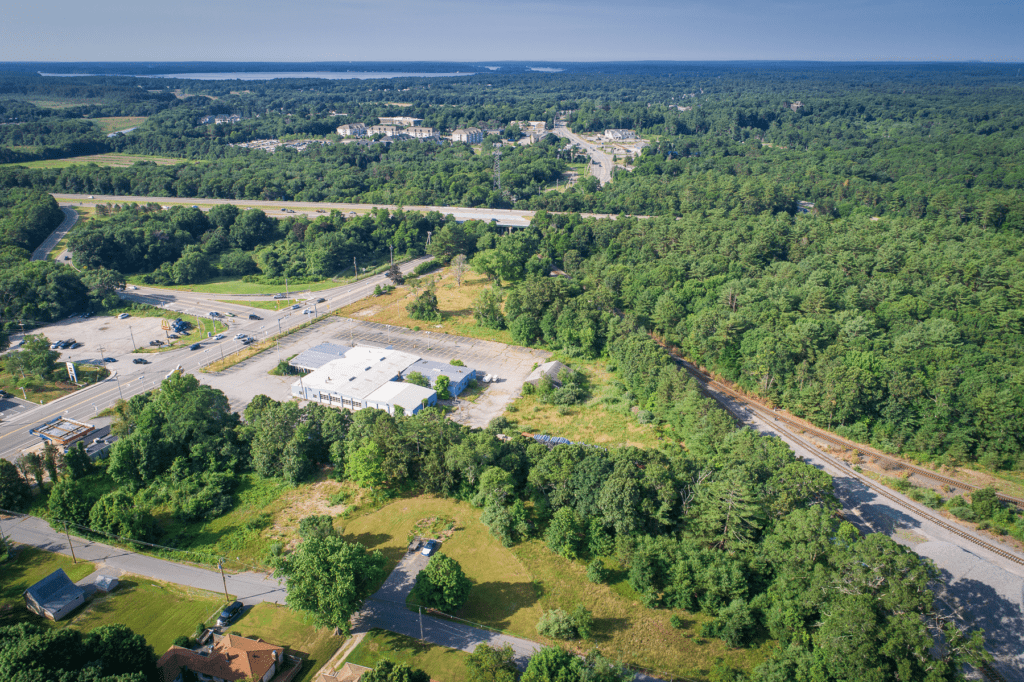 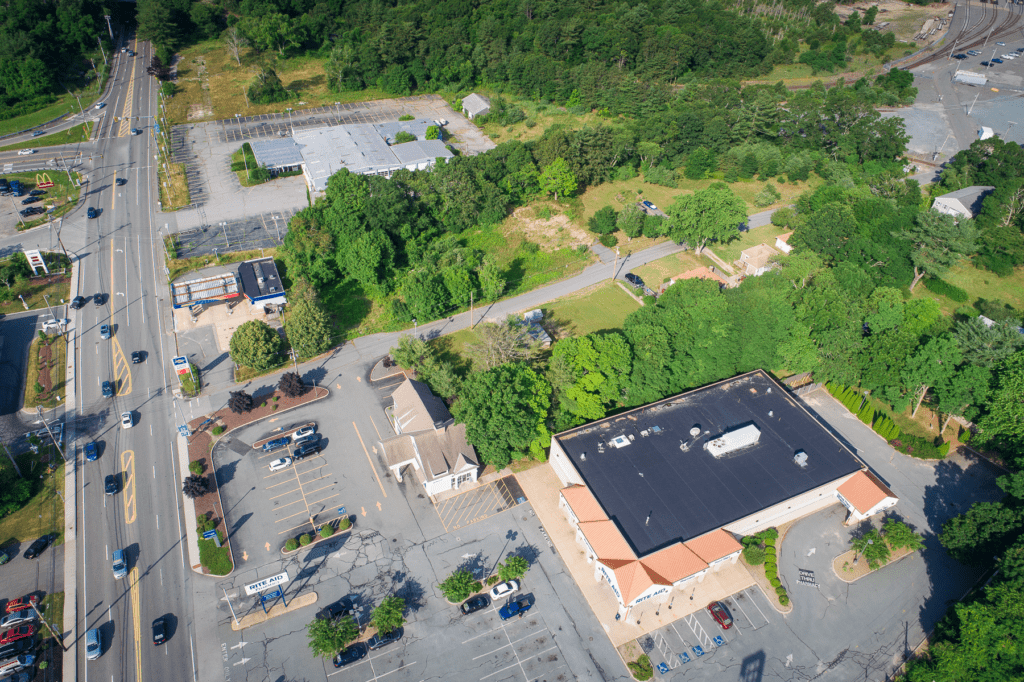 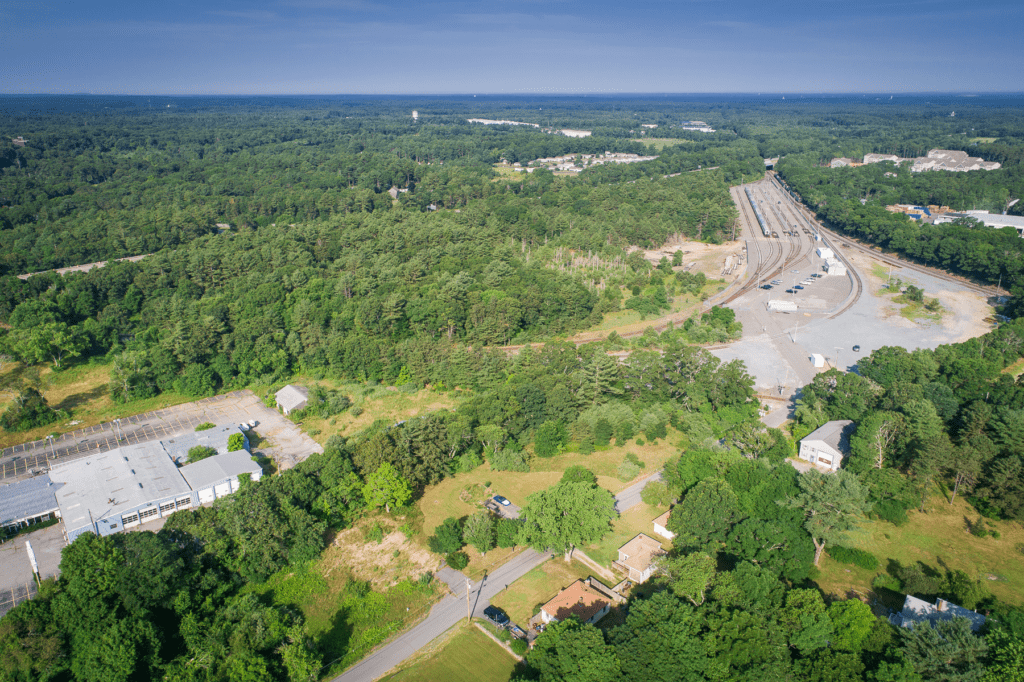 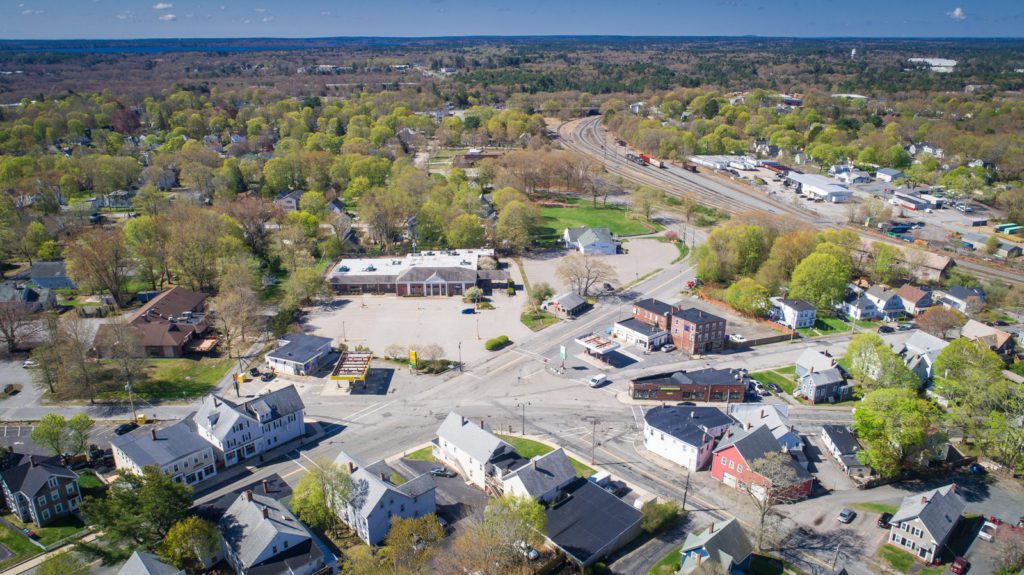 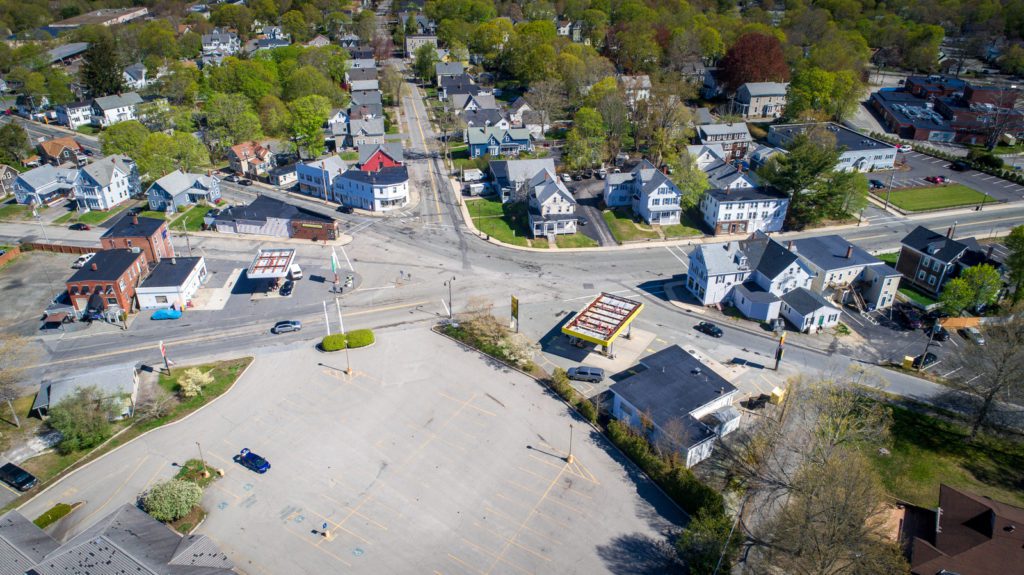 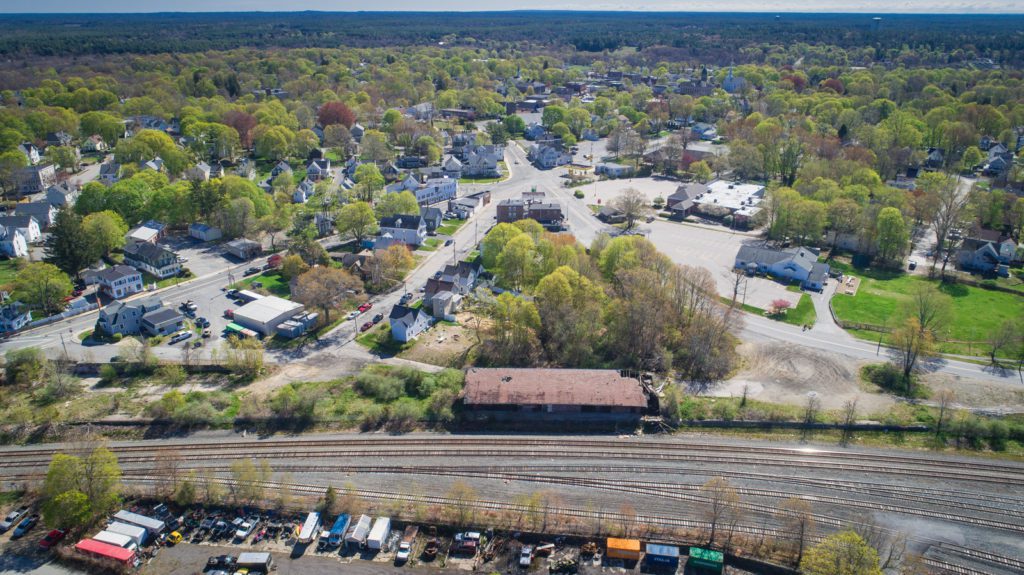 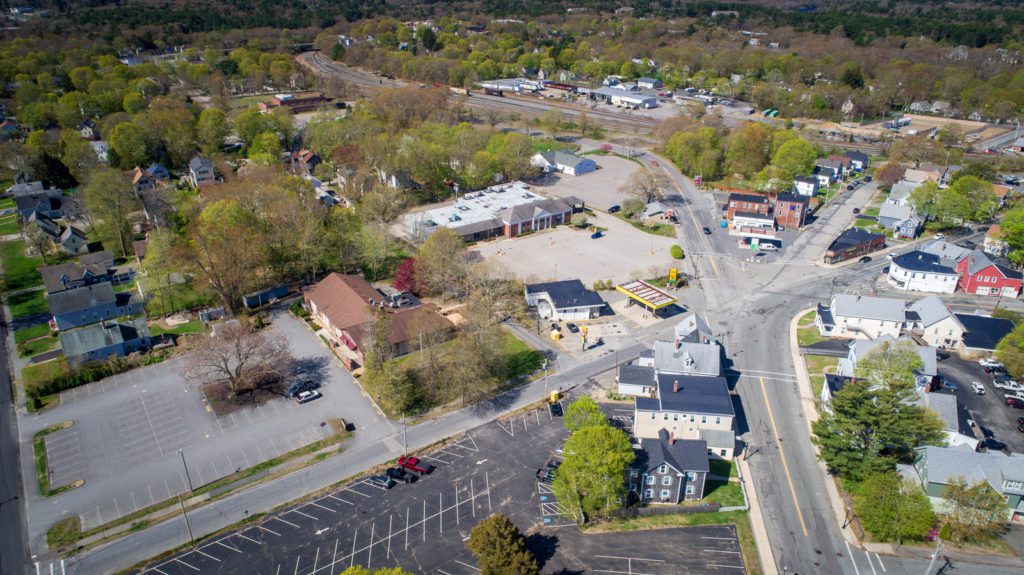