The Taunton River and its basin drains five hundred and sixty two square miles of the southeastern part of the Commonwealth. The slow-moving Taunton river supports a vast diversity of ecological communities, including brackish marsh, tidal freshwater marsh, estuaries, innumerable plant and animal species, and the largest alewife run on the Eastern Seabord.

The Taunton River is one of only 208 rivers nationally to bear the designation of 'Wild and Scenic' - a testament not only to its wonderous natural areas but the endless advocacy of those who care for the River.

Where to explore along the taunton river

The Taunton River is home to numerous recreational opportunities, including but not limited to kayaking, swimming, beach-going, hiking, fishing, and many more. Use the links below to explore different recreational activities.

A one-way trip down river from Weir Village Park to Dighton Rock can be made at any tide but will be much easier on an outgoing tide. On an incoming tide you can also paddle upriver from Berkley Bridge, Sweets Knoll or Dighton Rock quite easily, making it possible to do a round trip if you time the tides right. Visit Explore RI for more details.

Walk and picnic at the Sweets Knoll state Park

Down the hill from the parking area, follow the wide grassy trail straight down to a picnic table with an expansive view at the river’s edge. Retrace your steps to the old railroad crossing, then take the trail to the left to a stone wall, where the trail veers left again up a small knoll and picnic site overlooking the river. From the overlook, continue down to the river and then loop back to the trail along the railroad bed to return to the parking area.

Go for a bird-watching hike

Over 154 species of birds were documented along the river during the breeding season. Many of the marshy river segments support high concentrations or a high diversity of marsh nesting birds (such as Red-winged Blackbirds, Herons, Osprey and Kingfisher).

Go on a camping trip

The Taunton River offers a great place for canoe or kayak camping. You can do a two or three day trip on the Taunton or longer if you paddle the entire Wampanoag Canoe Passage.

There are two formal sites, Camp Titicut and Plymouth Rock KOA. Camp Titicut is a very historical site once occupied by the Wampanoag Native Americans and later a ship building site in colonial times.

About The Taunton River

The network of streams and rivers comprising the Taunton River basin drains five hundred and sixty two square miles of the southeastern part of the Commonwealth of Massachusetts. The river begins in the town of Bridgewater, Massachusetts at the confluence of the Matfield and Town Rivers. It is the second largest drainage area in Massachusetts and has one of the flattest courses in the state. Its level terrain creates extensive wetlands throughout the basin, including the 16,950 acre Hockomock Swamp, one of the largest wetlands in New England. Saltwater intrusion occurs as far as twelve miles upstream (the confluence with the Three Mile River) with tidal changes noticeable eighteen miles upstream. The Taunton remains fairly uniform in width within its freshwater portion, then broadens into an estuary (downstream of the Berkley Bridge).

Critical habitat areas along the Taunton include the Winnetuxet River, the Nemasket River, the Poquoy Brook, the Tidal Oxbow, and the Three Mile River.

The Taunton River is the longest undammed coastal river in New England and provides excellent habitat for all life stages of fish. The river contains warm-water fisheries, including riverine fish (fish that require flowing conditions), habitat generalists (fish that can live in rivers or ponds), and "estuarine wanderers" that move between estuary and freshwater.

The Taunton River provided a wide range of rich natural resources to support a sizable prehistoric population. Records of stone and wooden fish weirs indicate that the first settlers were taught about the use of fishing places by Native People. Throughout the 17th, 18th, and 19th centuries, iron and other metal related industries grew prosperous in the Taunton area, and it became known as the "Silver City". This area also became the largest textile producing center in the U.S. in 1860. Shipbuilding and commerce were at their height between 1700 and 1900.

With over forty miles of navigable channels, The Taunton River is a great place to canoe, kayak, sail or fish. Since the land along the Taunton River is largely undeveloped, the banks remain naturally vegetated. The numerous types of trees mixed with the golden brush, create a colorful pallet. Many maples reach out over the river, their brilliant foliage reflecting in the water.

Bike trails and walking paths are being developed and greenways are open to public along the tributaries as well. Several recreational sites have been preserved along the river, including camping and conservation areas. Furthermore, Somerset has the only public beach on the Taunton River.

The Taunton River's 2009 designation as a Wild & Scenic River has served as a powerful catalyst for land protection efforts along the river and its major tributaries. Collaborations with private/public entities, state agencies, and land trusts, have resulted in the protection of more than 1,500 acres.

Partners in the Taunton River Watershed

The Taunton River Stewardship Council (TRSC) is a partnership of more than 20 individuals, organizations, towns, and agencies who collaborate  to support a community-based approach to conservation.

The TRSC recommends ten actions that you can take to protect your rivers (including the Taunton River). Read the 10 steps below, and follow up for more information by visiting the TRSC webpage.

3. Get the media on your side

5. Get involved in meetings

6. Conserve water and energy at home 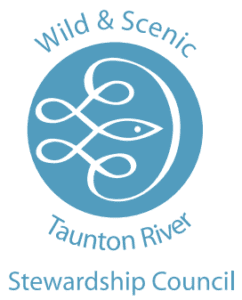